Lea Centauri has been singing since age four and is a master vocalist and instructor with experience teaching Voicedance, from Paris to Istanbul.  Voicedance is the breath and music of singing as expression, for all singers wanting the experience of Voice.
A mezzo-soprano, Lea lived in Paris for several years, performing and teaching throughout France as well as in Turkey and other countries in Europe and North Africa.  She is a vocal coach for all genres–Jazz, Pop, Blues, R&B, Rock, Show Tunes, Hip Hop, and Rap–working with individuals on technique and preparation for recording and performance, and also working with those who just want to sing for fun and personal enjoyment.  Her Voicedance program starts with breathing exercises for relaxation and clearing of energy, moving to vocal scales for tuning, range, stamina, and feeling good within as you sing, then to singing triplets for vocal control and expression, and finally to songs to enhance your vocal ability and build a repertoire of material you want to sing. Lea is also a songwriter and teaches beginning piano as well.  She teaches only private online lessons.
Request an online lesson with Lea. Sharman Duran, vocalist and keyboardist, has been performing jazz standards, Top 40, Soul, Rock, Pop, and Latin jazz in bands since 1976.  She works with adults and students in 7th grade and older.  Sharman teaches private lessons in voice and piano – in person or online.
Request a lesson with Sharman. Rick Harrell has been a voice and guitar teacher in the U.S., Europe, and Asia.  He currently serves as the Founding Director of Heroes’ Voices, a nonprofit service organization for veterans. Rick leads therapeutic singing and guitar music workshops for veterans with PTSD and other challenges.
Rick teaches singers in many genres including classical, folk, rock, country, and Musical Theater. He has been a voice teacher and guest Master Class instructor at universities and training programs including Yale, Indiana University, Chautauqua Institution, Loyola University, Mannes School of Music, University of Richmond, Virginia State University, and the University of Florida.
Recently a music professor at City College of San Francisco, Rick has served as Director of the Juilliard Department of Vocal Arts, Director of the San Francisco Opera Center, Head of Faculty for the Opera Training Program of the New National Theatre in Tokyo, Director of the Opera Program for the San Francisco Conservatory, Artistic Consultant and Principal Stage Director for the Bangkok Opera, and senior faculty for the Opera Studio of the Netherlands.
Rick performed as a baritone soloist with such companies as Lincoln Center Theatre Company, La Scala, Vienna State Opera, Washington Opera, Baltimore Opera, Fort Worth Opera, Opera Omaha, New Jersey Symphony, Richmond Symphony, and National Symphony. He recorded the role of Bernardo on the album West Side Story conducted by Leonard Bernstein and is featured on the recording of Bernstein’s last opera, A Quiet Place.
A frequent judge for vocal competitions, he annually adjudicates for the Metropolitan Opera National Council Auditions. Originally from Oklahoma, Rick grew up in northern Virginia, attended college in Washington, D.C. and New York City, and has lived for many years in San Francisco.  Rick teaches group classes and private lessons in voice and guitar. Francesca Lee graduated from Sir Paul McCartney’s Liverpool Institute For Performing Arts (Music) in 2002 majoring in pop vocal performance and songwriting with disciplines in both guitar and keyboard.  She is best known for her soulful/sultry vocals and music that merges styles of Folk, Pop, Blues, and Jazz.
During her residency in the U.K., Francesca performed as a backup singer for the popular televised awards show, The Top of the Pop Awards at The Manchester Arena alongside artists like Nellie Furtado, Tom Jones, Mariah Carey, Jennifer Lopez, Kylie Minogue, Wyclef, and Travis.  She was also featured in a pilot episode for the MTV Networks show (The Real World).  She recorded her first debut independent album with Scottish Sony recording artist Sandi Thom, who later topped the Billboard charts in the U.K. with her song “I Wish I Was a Punk Rocker.”
In 2004 she moved to San Francisco and established herself in the Bay Area music scene as a singer-songwriter.  A top ten regional finalist in The Lilith Fair Talent Search through Ourstage.com, songs from her album The Pieces Left, produced by Michael Winger, Executive Director for NARAS (The Grammys), was featured on KFOG’S LOCAL Scene Vol. 6 and Songwriters Unplugged-Live at Yoshi’s.
She has been working as a professional musician in The Bay Area since 2004 and has been a staff show producer for Bread & Roses Presents since 2010.  She is passionate about guiding students on how to discover their own unique sound, carve out their niche, and how to develop their craft as singer-songwriters.  She has also served as a previous judge for West Coast Songwriter’s monthly songwriting showcase & competition.
Francesca teaches online private lessons. Kevin Mullane graduated from Columbia College in Chicago with a B.A. in Music.  He has taught students of all ages and levels in Chicago, Los Angeles, and San Francisco, focusing on the individual student’s development of the skills necessary to enjoy playing the music they love. He has been a performing musician for many years and currently plays guitar and sings lead vocals with the Bay Area bands System 9 and The Nakano Jazz Quintet.
Kevin teaches private lessons (in person and online) in electric and acoustic guitar, bass guitar, voice, and ukulele, group classes, and band classes, using song suggestions from students as a vehicle to learn about chords, melody, rhythm, song structure, and technique. Students can explore theory, harmony, and composition in a variety of styles, including rock, jazz, blues, soul, funk, folk, and more.  He encourages students to play music on their own, jam with friends, or perform with a band. Whether you want to pursue music professionally or simply develop your skills and have fun, Kevin offers all levels of instruction.
Request a lesson with Kevin. A native of San Francisco, Lucia Pontoniere began playing violin at the age of 6. After pursuing classical violin seriously for 10 years, she began to explore other styles of music on the violin, including jazz, Irish, Scottish, and old-time fiddle. Lucia graduated from Berklee College of Music in 2018 with a Bachelor’s in Violin Performance and American Roots Music. During and after college she toured the country and recorded albums with her band The Ladles, a space where she began to explore writing songs and playing the guitar. Lucia teaches all styles of violin and fiddle as well as guitar, voice, ukulele, songwriting, and beginner piano. She particularly likes to work with violinists who have mostly played in a classical setting and are looking to explore other styles of music. She loves teaching and her music philosophy is built upon the idea that we should always follow the spark of our creativity.
Request a lesson with Lucia. 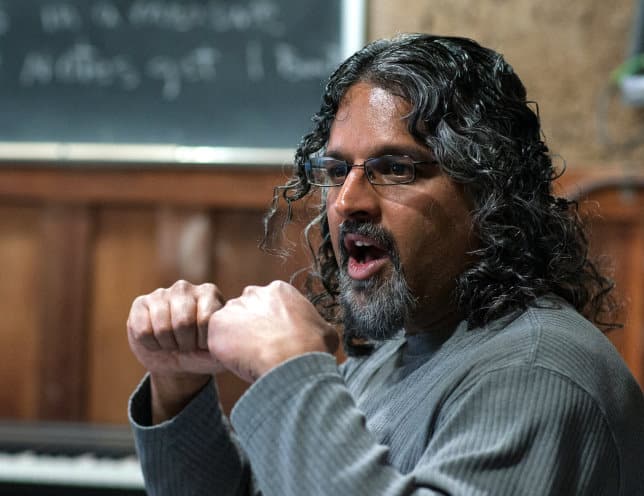 Janak Ramachandran has been playing guitar for the better part of two decades and teaching it for more than 15 years.  His acoustic guitar technique is designed to progressively build the skills needed to become a one-man or one-woman band.  With the use of songs specifically chosen for their instructive value, Janak’s teaching approach can take you from your first notes and chords to the complex rhythms, chord progressions, and scale knowledge that can make you a complete guitar player. Electric guitar shares many skills in common with the acoustic guitar, of course, but Janak’s electric approach includes more tailored skill building with regards to both the tools of phrasing (particularly as it applies to single-note lead work) and the aesthetic variety of different chord styles.  Since Janak also teaches voice and songwriting, he is a one-stop shop for anyone wanting to eventually sing and play together, whether learning to create their own music or interpreting the songs of others.
Janak began his vocal training at the age of six and eventually studied more professionally following college in various styles including Bel Canto and Speech Level Singing.  By combining ideas from these and other vocal schools of thought (e.g., Alexander Technique), he forms his foundational vocal philosophy, upon which he layers his own technique.  He has had success coaching beginning students unable to match pitch to eventually perform on stage as well as guide professional singers in the studio when recording an album.  He has fronted (both with and without an instrument) numerous bands, performed in musicals as well as dramatic and comic stage plays, and developed an acting technique for singers and instrumentalists designed specifically for musicians performing on stage. In 2008, Janak’s band Bottoms Up! was the top cover band in a California battle of the bands competition.  His teaching credits include the children of Todd Rundgren and Linda Ronstadt as well as numerous local musicians in bands like Tainted Love and The Doorslammers, some of whom have studied with Janak for years.
Learn more about Janak at musiclessonguru.com.  Janak teaches online private lessons in guitar, voice, ukulele, bass, and piano, and group voice and guitar classes online and in-person at Blue Bear.
Request an online lesson with Janak. Amanda VanderMeer graduated with high honors from Portland Community College’s Professional Music Program and has been playing and writing music for twenty-five years, touring the globe and releasing two studio albums. Since 2006, she has taught a wide range of ages in drums, piano, vocals, music theory, and songwriting. She plays drums in her current band Deathtrap America.  Amanda teaches online private lessons in piano, drums, and voice, and is Co-Director of our All Star Band Program.
Request an online lesson with Amanda.
Back to top
X