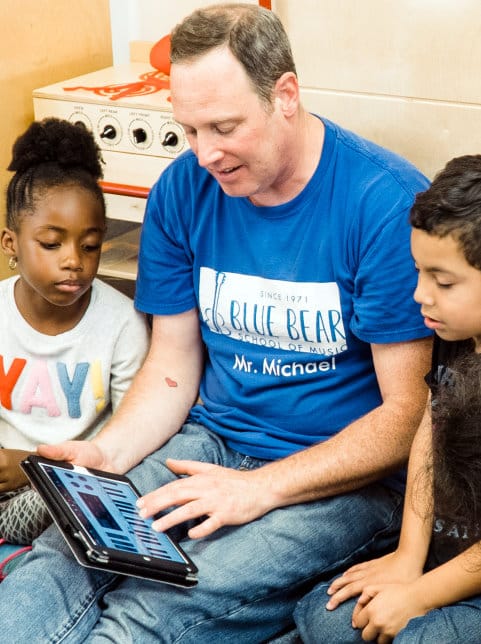 Michael Chulada joined Blue Bear in 2015 working at many of our off-site community programs with after-school kids.  While studying for his certificate in early childhood development, the connection was made that Little Bears would be an awesome fit!  Michael has played in many San Francisco bands and has a real knack for picking out fun songs that will get everyone movin’ and shakin’! Nathan Crowe is a composer, performer, and teacher of music based in San Francisco.  He holds degrees in music composition from St. Olaf College and The San Francisco Conservatory of Music.  As a multi-instrumentalist (French Horn, Electric Bass, Guitar and Piano), he has had the privilege of playing many different roles as both a soloist and in a variety of ensembles, ranging from formal orchestral concert hall settings to collaborative improvisation sessions, freelance gigs, and several bands throughout his career (genres include Classical, Indie, Jazz, Rock/Blues, and Metal).  As a composer, his output reflects the performing environments he’s been in–many times synthesizing elements of the music he loves to listen to and play.  Nathan currently sings as a volunteer with St. Dominic’s Schola Cantorum in Lower Pacific Heights, works as a music librarian at SFCM, and continues to write and record his own music. Meggie Davidson joined Blue Bear as an experienced early childhood music teacher. A lifelong musician, Meggie has sung in numerous choirs and chamber ensembles over the years, as well as performing her own music as a solo artist. In San Francisco, Meggie can be heard singing at City Church of San Francisco, and in the CCSF choir, often performing alongside members of Magik*Magik Orchestra and the San Francisco Symphony, as well as with other Bay Area musicians. With a BA in music performance, she loves sharing a wide array of musical styles with her students: anything from jazz, to opera, to Broadway, to rock! An exuberant kid at heart who loves being silly, Meggie loves teaching in the Little Bears program! Rachel Hoiem has been part of the Little Bears program for over 10 years. She loves getting everyone moving with her zany songs that she’s collected from the many years she has worked with children. She has a B.A. in jazz piano from SF State and is proud to be a native San Franciscan. She’s played shows on most of the stages of local SF clubs and continues to record and perform with her band, Novio Electrico. She enjoys sharing her love of rock n roll, country, surf, and blues with lots of guitar jams and boogie-woogie piano that’s sure to get you and your kiddo grooving to the beat! Stephanie Lamond is a San Diego native who has been living and breathing music as long as she’s been, well, living and breathing. In addition to leading the Little Bears program, she heads up Blue Bear’s marketing and subs Little Bears classes frequently. When she’s not at the Bear, you can find her playing shows around the state, engineering and producing in and out of studios around the Bay Area, or zipping around the City on her ’83 BMW R65 motorcycle. Steph’s artist project, writing, and studio work can be found at stephanielamond.com. Jasmin Moosavi studied at the American Musical and Dramatic Academy and at Marymount Manhattan College for Voice & Performance in New York City. She began recording music, writing lyrics, and performing on stages all over the East and West coasts at a very young age. A musician at heart and an educator by choice, Jasmin is a seasoned vocal coach, acting teacher, musician, and performer. Her formal training as a classical singer is apparent in her musical influences which range from heavy metal to classical opera; Jasmin believes that a true musician has a variety of musical influences. Jasmin works professionally with singers and artists of all genres, including rock, metal, jazz, Broadway, and classical. She helps singers of varying vocal styles to access and maintain their peak abilities in singing and musicianship, regardless of their level of expertise. Jasmin teaches her students how to develop correct singing techniques, apply them successfully, grow creatively, and gain healthy vocal strategies to deliver a skillful performance on stage or in the studio. She has found that the perfect way to combine her love for learning and sharing her passion for music is through teaching. Jasmin can be found performing with her Bay Area-based band. Tennessee Mowrey is a Bay Area native who has been a musician for as long as he can remember. A multi-instrumentalist singer/songwriter who has written for folk, rock, reggae, and punk bands, he has also written numerous film and theater scores. He is proficient in guitar, bass, drum kit, hand percussion, mandolin, and ukulele. He has released multiple self-produced solo albums, as well as albums with his various bands, including Borneo and Electric Tiger Lily. He has played at the Sweetwater and at the Mountain Play (really!). Tennessee graduated from Wesleyan University with High Honors in Music in 2014. He has limited availability for private lessons. Sophie Pipia is a pianist and accordionist from Washington State.  She has taught elementary school music since 2015, first in Central Oregon through Ethos Music Center’s Rural Outreach Program, and then throughout Bay Area public schools with the nonprofit organization, Music for Minors.
She founded and directed the Madras Children’s Choir, and has directed numerous children’s musicals in the Pacific Northwest.  Sophie currently teaches private lessons in piano and accordion.  She is thrilled to be a part of the Blue Bear School of Music team, and continue to share her love of music with students throughout the Bay Area. Mari Ronimois is an experienced musician, singer-songwriter, performing artist, and aspiring music composer and producer.  Growing up in Estonia, she started her musical education with seven years of classical piano, followed by six years of training in pop-jazz singing. At the age of 14 she started to write original music for her first band that she formed with her best friends.  Ever since, she has been working in a wide range of genres and collaborating with musicians all over the world.  Mari has been a frontwoman in rock bands and has performed in musicals (lead role in Estonian version of High School Musical), piano bars, and cruise ship show production groups.
Her current studies in San Francisco Conservatory of Music’s Technology and Applied Composition program have provided her new skills in composing for film and video games, as well as inspired her to broaden her songwriting and performing methods with electronic music.
Mari believes in creating communities through the universal language of music and that knowledge increases with sharing.  Utilizing a variety of teaching methods from previous teachers, she has found an efficient way to encourage children to express themselves through music, and is motivated to make their first experience of studying music as enjoyable as possible.
Back to top